Due to the recent sunsetting of the InfoWater SA hydraulic modelling software, UWS was tasked with converting the Kyabram water supply model across to InfoWorks WS Pro (2021) for Goulburn Valley Water (GVW).

The Kyabram model conversion was a challenge as it was the first GVW water model to be converted. UWS’ intimate knowledge of both software packages assisted immensely with the successful outcome of the project.

As part of the undertaking, UWS compiled an InfoWater SA to InfoWorks WS Pro conversion procedure for GVW, highlighting specific areas that need to be checked and reviewed.

Due to the differences in the internal software computations and the way that different assets are modelled, it is not possible to just directly import or open the old model in the new software. According to Innovyze, “Some data is not imported at all, or is only partially imported. Some InfoWater objects are imported as more complex InfoWorks objects, and additional data will be required to completely define these InfoWorks objects.”

UWS undertook extensive checks on the outputs of both models to ensure the converted model was an accurate representation of the previous model. After tracking down the differences between the simulations, UWS made multiple updates to the controls and asset information to ensure that the new models accurately reflected the behaviour of the old model.

At the end of the process GVW was assured the model was fit for purpose and they were confident in using it to undertake further analysis in the new software platform. 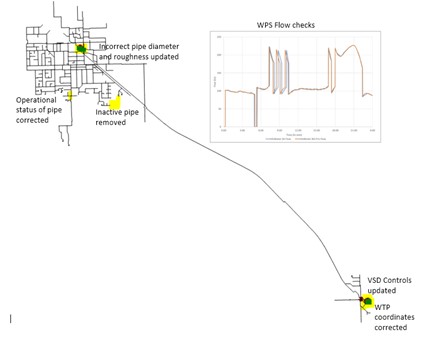